47 results were found for "Street".

Innovative street furniture & smart services Function with design and service: Our aim is to integrate street furniture and media stylishly and discreetly into the urban environment while helping to design modern public spaces by providing services and infrastructure. This includes the construction

Cologne, 29 March 2012 Ströer Out-of-Home Media AG continued on its growth path in fiscal year 2011, mainly due to its strong performance in Germany. The Group's revenue increased by 8.6% from EUR 531.3m in the prior year to EUR 577.1m. Adjusted for increases in investments and exchange rate effects 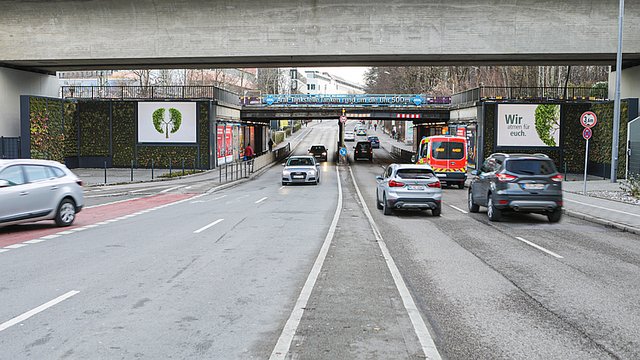 A vertical garden at the heart of the city. In a first for the Company, Ströer has greenscaped a railway underpass on Munich’s busy Rosenheimer Strasse. It took 15 weeks of preparation to create the verdant garden that covers around 90 square meters and features eleven different plants. The garden i

Cologne, 15 May 2013 In the first quarter of 2013, Ströer Media AG built on the positive trends already indicated in the final weeks of 2012 and increased its revenue by EUR 6.8m year on year to EUR 125.5m. Organic consolidated revenue grew by 5.9%, mainly due to higher revenue in Germany and Turkey

Ströer Out-of-Home Media AG continued on its growth course in the first nine months of 2011. Consolidated revenue was up 12.8% year on year to EUR 416.3m (prior year: EUR 369.1m), partly owing to the additions made to the investment portfolio in the prior year. Excluding the changes in the consolida

Ströer Out-of-Home Media AG continued to be faced with volatile markets in the first half of 2012. Nevertheless, the group further advanced its investment core areas. The group was unable to match the high revenue of the prior-year period. In the first half of the year, consolidated organic revenue

Ströer on stable growth course in the first six months

Cologne, 13 November 2012 The third quarter of 2012 saw Ströer Out-of-Home Media AG continue to invest selectively in its specific growth projects in Germany and abroad. The Group focused particularly on the roll-out of digital advertising media and premium billboards and is seeing positive developm

Ströer continues on its growth course in the first quarter

• Consolidated revenue up 17.0% in the first quarter of 2011 to EUR 122.9m • Consolidated organic growth at 9.7% • Strong performance by Ströer Germany with high organic revenue growth of 9.4% • Operational EBITDA down slightly on the prior year due to start-up costs for various new projects • High