Ströer on stable growth course in the first six months

The journey is the destination! Up to 70% of purchasing decisions are unplanned. Our attention-grabbing media generate maximum reach and showcase your products large-scale directly at the point of sale. Targeted POS measures can effectively influence the decision to purchase. 24,000 POS spaces Nine

After four challenging and successful years as general manager of Ströer Media Deutschland GmbH (SMD) and as a member of the management board of Ströer Out-of-Home Media AG, Dirk Wiedenmann has decided to continue his career outside the company. His responsibilities included working intensively with

Esther Raff will become Managing Director for Sales and Marketing at Ströer Media Deutschland GmbH (SMD) in Cologne as of March 1, 2012. A media expert, she has made a name for herself in the media world by her work on the reorientation of radio marketing company AS&S Radio GmbH over the past six ye

Ströer continues on its profitable growth course in Q3

Ströer continues on its profitable growth course once again in the third quarter of 2016. Revenue in the first nine months of 2016 rose by 38.4% from EUR 553.2m to EUR 765.7m. This is attributable to strong growth in the OOH Germany and Digital segments. The Ströer Group recorded organic revenue gro

Ströer SE & Co KGaA continues on its profitable growth course in the first quarter of 2017. Quarterly revenue grew 24% year on year from EUR 226m to EUR 281m, with organic revenue growth at almost 9%. Operational EBITDA increased by a substantial 20%, up from EUR 46m to EUR 56m. Adjusted profit for

Record earnings for 2016 and very good start to 2017: Ströer plans a further dividend increase of almost 60% to EUR 1.10 per share

Ströer is confirming the preliminary results announced in February for fiscal year 2016: Annual revenue grew by 36% from EUR 824m to EUR 1.12b with organic revenue growth at over 7%. Operational EBITDA increased by a very substantial 37%, up from EUR 208m to EUR 285m. Adjusted profit for the period 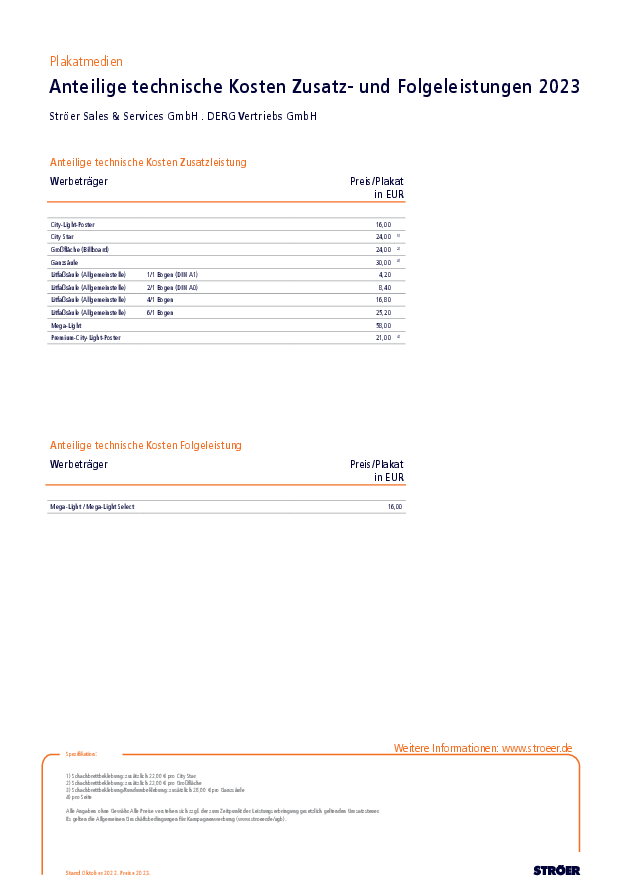 Ströer Out-of-Home Media AG continued on its growth course in the first nine months of 2011. Consolidated revenue was up 12.8% year on year to EUR 416.3m (prior year: EUR 369.1m), partly owing to the additions made to the investment portfolio in the prior year. Excluding the changes in the consolida