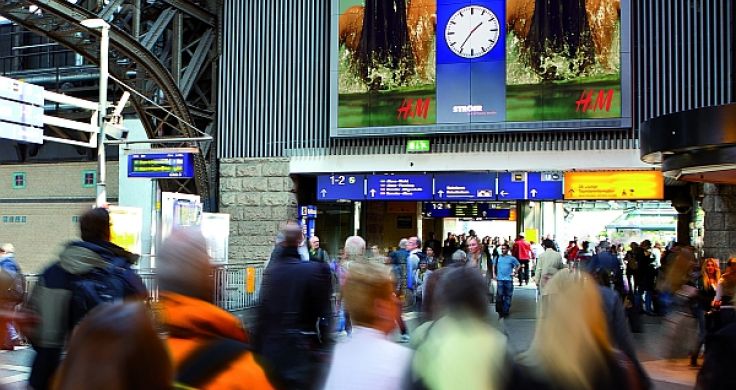 Ströer Group has taken a further qualitative step into the future of digital out-of-home advertising by installing huge LCD screens measuring 24 and 16 square meters at Hamburg and Düsseldorf’s central stations. The screens are the first of their kind at train stations in Germany and complement the Cologne-based S-Dax company’s extensive digital Out-of-Home-Channel network.

Swedish fashion chain H&M has snagged the opening slot: Starting immediately, it will exclusively show off its products on the LCD screens located near Hamburg Central Station’s southern footbridge (Südsteg) and on the screens of the Out-of-Home-Channel. H&M will launch its swimming and holiday season, presenting its newest bikini range in two 15-second ads that cannot be overlooked. Starting Monday, the screens will become part of Ströer’s digital network. They will be synced up with the Out-of-Home-Channel’s continuous program – a professional mix of news, information and advertising.

„Thanks to our Out-of-Home-Channel, we are the trend-setter in digital out-of-home advertising. We have put the third pillar of the moving images market in place through the set-up of an extensive network”, explains Ströer CEO Udo Müller. „Ströer is now offering access to the most frequented ad spaces in Germany: our LCD screens in Hamburg Central Station’s southern footbridge (Südsteg). No other site in Germany is as highly frequented.”

Thorsten Ebbing, Managing Director of kinetic: „We are very proud that our customer H&M has booked this innovative medium exclusively as the first. H&M has been one of the biggest advertisers in the Out-of-Home Media. This is also a confirmation of the orientation of kinetic to the field of digital out-of-home media.”

With over 450,000 visitors per day, Hamburg Central Station is the most-visited railway station in Germany. According to the Fraunhofer Institute’s Frequenzatlas (Traffic Count Atlas), 150,000 people pass the two LCD screens at the southern footbridge (Südsteg) every day. The LCD screens are also visible from a long way off on the station platforms, where travelers are alerted to the ads’ messages.

At Düsseldorf Central Station, a total of four 16-square-meter LCD screens have been mounted in the terminal. They too will be made operational in the coming days.